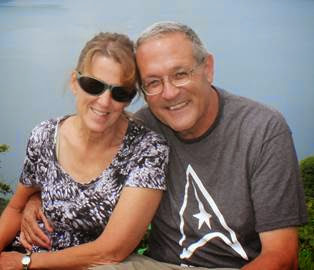 When you want to publicize something, you usually think in terms of email, facebook, web site, mass telephone calls, and even direct mail. However, in Nueva Guinea, we "perifonear" - that is, a pick up truck with loud speakers, drives down the streets of your barrio playing music and making your announcement. For those of you at GOC, I'm giving you your kickoff plan for January.

We picked, for music, a really jazzy "ABC's" song.
Check out our stylish advertising truck

If you want to hear the recorded announcement, listen here...
colegio manto
Posted by Bob Kelly at 11:45 AM 1 comment: 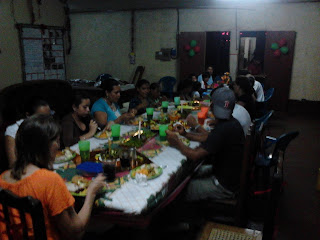 We celebrated our first Thanksgiving in Nueva Guinea doing several things - activities with the shoeshine boys and kids of the barrio centered on giving thanks, and a dinner with the family and other friends, prepared by my wife. They got to taste dressing, cranberry sauce, and even pumpkin pie (made from scratch - Barb found a pumpkin in Managua). It took a little while for them to understand why football was a part of Thanksgiving, and how the Cowboys affect us mentally, and explaining "Black Friday" was a real trip.

Having said all this, we are thankful to our God, as stated in President Washington's first Thanksgiving proclamation, for all His blessings on us and our nation. And as a thankful people, we do choose to follow Him. May God richly bless you all and may you continue to grow in Him.

Sewing and Reaping - a perspective 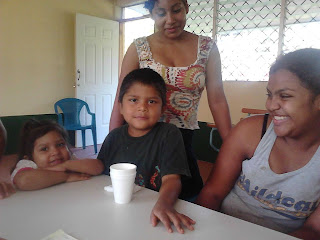 It's important to remember that the biblical principle of sewing and reaping is sure, but it's also a process that takes time. You may plant, and there will be a harvest, but in the time of watering and formation, patience is required. In this time, between planting and seeing the result, our faith is tested, which according to God is a good thing, as untested faith is not biblical faith.
This is a photo of Josúe, an eight year old kid that will study with us next year. While he is a cute kid, he's never been in school nor in the discipline of school, and while we can see the day where he graduates and even speaks English, our faith is required during the process when we'd like to say - this just isn't working.
I want to encourage everyone to look at the most difficult things in your lives and remember that you need to plant biblically in these areas and believe God, but don't miss out by being impatient or being frustrated when your faith is tested and things don't seem to be working out.
A last thought is something I have mentioned before. When a farmer plants a seed, he himself most likely will harvest the fruit. However, he is not the sole beneficiary of what is reaped. His product will primarily be used by others. When we plant spiritually, we can't always expect to be the main beneficiaries of the harvest. Please think how this might apply to your lives.
Posted by Bob Kelly at 1:28 PM No comments:

An election analogy for the church

Observing the mid term election results in the USA, I began to think about the church and its mission. I wanted to share an analogy with you all. Now I know that many of you who read this blog are not conservative politically, and so I want you to understand that this is not so much a political comment, but an attempt to help explain a spiritual principle using the recent elections as an example. Please just see the example and not the politics.

Watching the recent wins by the Republicans, I have noticed the following:

1. The "new" Republicans, that is the real conservatives, may seem new, but in
fact they are old in the sense they want to return to the constitution and limited government, the way things were designed - for example Marco Rubio.

2. The "old" Republicans are those who want to get along and keep things the same and in fact, don't hold real conservative values - for example, Trent Lott and Colin Powell.

Now, applying this to God's work.

1. There are always "old Republicans" in the church - those who want to have things nice and will go along to get along. These are pastors, missionaries, and Christians that want to have contented Christian lives, but at no cost (Jesus defines His follower as someone who has to pay a cost). The new "radical" guys bother them, although biblically, what is seen as a "radical Christian" today is no more than a normal Christian in the Bible. What should be the normal Christian life is unfortunately seen today as unbalanced.

2. There are also the "new conservatives" in the church - not doing something new, but aggressively returning to our real roots and mission. These are the "biblical constitutionalists" and unfortunately, will be opposed by the old line Christians, which are similar to the Pharisees of Jesus' day.

What does this mean (to me anyway)?

I think God is calling the church to a radical return to our roots and mission. For you young people, you need to realize that, while the Word of God doesn't change, the way we do it will need to be redefined continually or we fall into the trap of thinking that our style is sacred. For you young folks, you can count on me as an old guy to support you, as long as you keep to the Word and the biblical mission.

Thank God for the new thinkers and the young Christian leaders with such passion - one of my favorites is Francis Chan. If you haven't read "Crazy Love", you need to do so.

May God richly bless you in these truly exciting times for the Christian church.
Posted by Bob Kelly at 6:48 AM No comments: 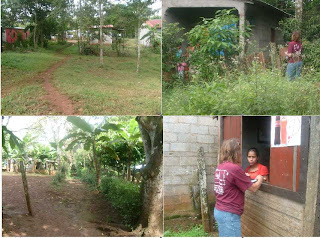 There is a good team in place for next year - principal and teachers, but they still need to be committed to personal growth and excellence in their work. We appreciate everyone's continued support and prayers. We also appreciate those who are wanting to bring construction and ministry groups to work here.
Posted by Bob Kelly at 11:27 AM No comments:

Bob Kelly
I have been married to Barbara for 39 years and have 4 children and 3 grandchildren. We served as missionaries in Central America for 10 years in the 1990s, pastored a Spanish speaking congregation in Dallas for 10 years, and in 2010 moved back to Nicaragua to start Manto de Gracia Christian School in Nueva Guinea.